The present General Superior and her team were elected into office at the 2011 General Congregation held in Spain. 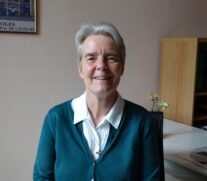 General Superior
Born 1955 in Bolton in the north of England, I entered the Congregation of Jesus in 1974 because I felt that God was asking me to give myself completely to Him and I knew the Congregatio Jesu in England and no other religious order – only later did I discover Mary Ward and our spirituality and thus was confirmed that I was in the right place. 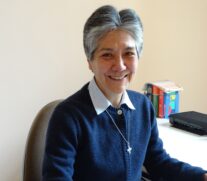 Vicar General
Born 1959 in Chillán, Chile, I entered the Congregatio of Jesus in 1982. The person of Jesus and his project captivated me. Being contemplative in action-mission motivated me to join the sisters of the CJ. Since 2012 I have been one of the Assistants in the Generalate in Rome. Part of my current mission is to accompany the Amerindian Province (Argentina, Brazil, Chile), the mission in Cuba and the Spanish and Latin European (Italy and Romania) Provinces. 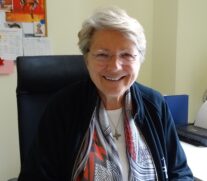 General Assistant
Born 1949 in Fritzlar, Germany, I entered the Congregatio in 1970, after getting to know the sisters in Bad Homburg. I was inspired by their enthusiasm for Jesus and their love of people. I felt called by Jesus to go on the same way as they did. Since 2012 I have been one of the Assistants on the Generalate in Rome. My main task is to be a bridge between the Generalate and the Middle European Province (Austria, Germany, Hungary and South Tyrol) and the Slovak Province. 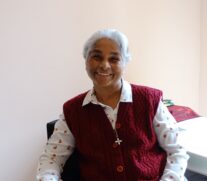 General Assistant
Born in Kerala, India in 1952, I was received into the Congregation in 1969. I wanted to follow Jesus by serving the poor of North India. I am one of the General Assistants with particular responsibility for the Provinces of Patna, Allahabad, Delhi and the Regions of Bangalore and Nepal. My area of specialization is counselling and therapy. I enjoy writing. 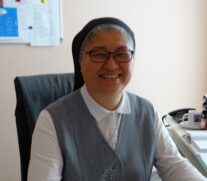 General Assistant
Born 1963 in Daejeon, Korea, I entered the Congregatio Jesu in 1991. Encounter with the loving and omnipotent God led to a strong desire within me to serve Him. The religious seemed to know how to serve God much better than I did. For the last twenty years I have lived what I have learnt from my companions in the CJ. I am a General Assistant taking care of the English Province, the Korean Province and the Zimbabwe Region while attending to the whole congregation. 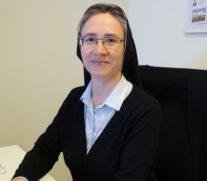 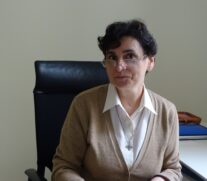 General Secretary
Born 1964 in Prešov, Slovakia, I got to know the sisters of the Congregation of Jesus during Communist times and joined them in July 1989. I was captivated by the great love and courageousness of Mary Ward. Since March 2012 I have been working as General Secretary. I do my mission with pleasure and I really enjoy it. Through my service for others I look for and I find God, joy and goodness. I try to do ordinary things with love.