On 2 December 2020, Mass was celebrated in the Oratorio de Caravita to honour three religious  sisters and one lay volunteer who were martyred in El Salvador 40 years ago.  Two Maryknoll sisters Ita Ford and Maura Clarke, an Ursuline sister Dorothy Kazel and Cleveland lay volunteer, Jean Donovan gave their life in trying to help the suffering people of El Salvador. Ita Ford was targeted specially by U.S. backed Salvadorian death squads because she stood up to them in defence of the disappeared.  Maura Clarke wrote thus, only a few months before her death. “If we leave the people when they suffer the cross, how credible is our word for them?  The Church’s role is to accompany those who suffer the most and to witness our hope in the resurrection.”
Cardinal Michael Czerny SJ presided the over the Eucharist. Jane, the General Superior of the CJ did the bidding prayers. In his homily, Cardinal Czerny read out a moving letter by an eyewitness of what had happened on 2 December 1980 and he remembered all the martyrs of our days who live their faith and follow the path of Jesus. A group of CJ and IBVM sisters were among the participants. Another 107 followed the live streaming on Zoom. (text and photos/eka) 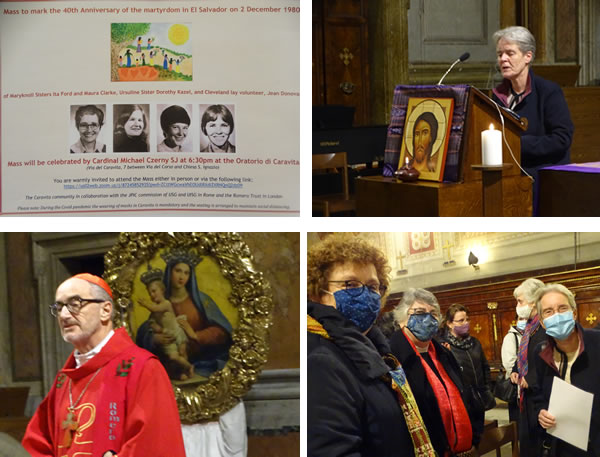 What we know about God’s will